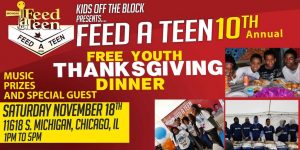 Food, family, fun on menu for more than 1,000 expected for 10th “Feed A Teen” celebration

Feed A Teen is free and open to the public, offering a full Thanksgiving dinner with all the trimmings –served by volunteers and guests alike – plus gift giveaways, entertainment and surprises.

Latiker also will announce a new project with director and producer Bill Duke, one of five “Champion for Teens” award recipients being honored at the event. Latiker, a mother of eight who has lived in Roseland for nearly 30 years, began hosting pre-Thanksgiving dinners for youth and families in 2007 after seeing how many kids in her community were going without a traditional Thanksgiving meal. “The Feed A Teen event represents a community that cares for our children and teens and wants to show them support, love and a sense of family,” says Latiker. “I’m proud that it brings together so many people to give and receive love, and that it’s become one of the most anticipated holiday events on the South Side.” ​

Latiker feeds hundreds each year with the help of volunteers from schools, religious and corporate organizations and fraternal groups across the region, along with a patchwork of in-kind and cash donations, and her own financial contributions. For this year’s dinner, she didn’t have to worry about piecemeal financial assistance, thanks to contributions from private donors and Euromonitor International, which underwrote the event after hearing about her work.

At the event, Latiker and KOB will present the “Champion for Teens” Award to five individuals to acknowledge their contributions to young people and the city of Chicago. The 2017 honorees are: Antione Dobine, community member – for his role as a KOB mentor and coach Bill Duke, director, producer, actor – for his efforts to highlight KOB’s impact Moe Forte, producer – for his diligence in bringing attention and resources to KOB Maria Pike, community activist – for her contributions to KOB programs and youth Jeff Stroy, producer – for his work on forthcoming KOB mobile application and other projects

About Kids Off The Block

Kids Off The Block (KOB) is a not-for-profit organization serving low-income, at-risk Chicago youth ages 10- 24. Launched in 2003 in the living room of Diane Latiker, a Roseland mother of eight, KOB’s offers positive alternatives to gangs, drugs, truancy, violence and the juvenile justice system with tutoring, internships, job skills training, sports, cultural and social events and life skills training. KOB has served more than 3,000 youth around Chicago, and its alumni have gone on to earn college and trade scholarships, internships and apprentice opportunities, as well as college degrees and professional certifications.

Since 2007, KOB’s “Feed A Teen” Thanksgiving dinner event has served more than 6,000 youth and families, while its holiday toy drive has donated gifts to more than 1,200 families since 2010.