Kids Off The Block Enjoying The Basketball Court 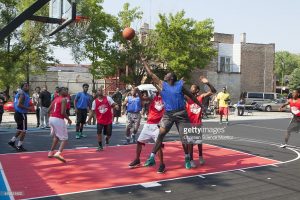 CHICAGO, IL – JUNE 9: Young men play in a basketball tournament sponsored by the nonprofit Kids Off the Block on a court in the crime-ridden Roseland neighborhood, on June 9, 2014 in Chicago, Illinois. The court is behind a memorial created by Diane Latiker to people 24 and under killed in the metro area since May 2007. Ms. Latiker, who lives across the street, also founded the non profit KOB. The basketball court was paid for by Steve Kaplan who was on the TV show Secret Millionaire. (Photo by Melanie Stetson Freeman/The Christian Science Monitor